If you want to influence someone, then understanding what they desire will increase your chances of success. It forms one of the parts of the tug of war between desires, fears and morals that takes place when we're asked to do something.

It's always interesting to watch the reactions of people when we discuss power as a desire, either in themselves or others. People rarely want to admit to desiring power and the concept has come to be seen by many as somewhat distasteful. It's often seen as corrupting and when talked about in the media it's almost always because of an abuse of power.

At its core, power is control of our self over something. This something could be other people, a situation, a decision or even a skill. In his work on motivation Daniel Pink talks about mastery as being one of the key drivers of motivation, and power is intrinsically linked with this if we are talking about having power over a skill or ability.

Trying to work out what individuals are interested in having power over and how important this is to them can help when we are framing a discussion. Some individuals will want to overtly be seen to have power whilst others are happy to exert it invisibly. Many of us have probably successfully had an idea implemented by letting someone else think that the idea was their own.  This is still exerting power over the situation and may be as strongly motivating to the person doing it as an overt display of power.

Power is often confused with other desires such as status. It’s possible to be motivated by the outward status signs of power without being motivated by power itself. Whether this is being more concerned with the perks of a promotion than the powers that come with it or even fearing exerting the power that is expected with certain roles.

Power can also be closely linked with the fulfilment of other desires. Exerting power of a work situation may satisfy the desire for independence. In these cases the key desire may not be power but what it leads to.

If power is a key desire for someone then identifying how it manifests itself, what someone wants power over and how they want to achieve this, can allow us to frame our influence message in the way that best meets this.

At Applied Influence Group we used the work of Stephen Reiss to help provide a framework for understanding desires. This is the first in a series of articles looking at the 16 core desires that Reiss identified.

Power is a force that needs an object: To have power, a person has to have it over something, or someone. One would think that this would be the appeal of power—to be able to control things, to change them to fit your vision of reality. (This can obviously be good or bad, depending on who’s in power and what their vision is.) But a new study suggests that people who desire power are mostly looking to control one thing—themselves. 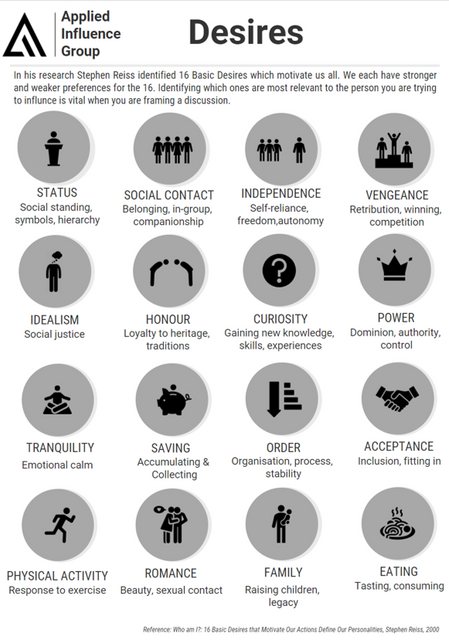 What's The DNA Of Your Team?
Dan Connors